Portland's governing charter is up for review. On 26 Sep 2011 they sought public input. As part of my ongoing mission to bring civilian oversight to the Portland Police Bureau (PPB), in the hope that citizens can force institutional change upon the city's prime bastion of racism, I testified as to my perceptions of the Independent Police Review Board (IPRB).

I asked the city charter be amended so that the IPRB could achieve some independence. Currently the City Attorney does double duty: he defends police misconduct in lawsuits against the city (the top 25 settlements have cost the city $6,000,000) and the attorney is responsible for getting to the bottom of police misconduct, through the IPRB. An amendment to the city charter could restructure the IPRB so that it has its own council and so that a city council could not disband it by a simple majority.

I got cotton mouth. It sounded like I was completely out of breath. I managed to speak to the importance of a separation of powers. I gave some historical context (Oregon's consitution prevented Blacks from being in state after sundown until the late 1920's; Oregon did not pass the 15th Amendment, giving Black men the right to vote, until the end of the 1950's, only more than twenty years after the PPB not only infiltrated peace groups, but sought to get clergy and academics fired during their opposition to the Viet Nam war in the 1960's did the public become aware of this kind of police activity).

I have made another (raspy) attempt to eliminate racial disparity in the treatment of my brothers and sisters of color by City of Portland employees. I forgot to put my testimony in the context of an effective, proactive response to the Civil Rights investigation Portland is now undergoing by the U.S. Department of Justice.
Posted by rdhardesty at 5:06 PM No comments: 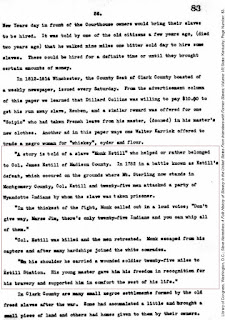 Two things strike me about this account. One, that the capture and preservation of this account was the result of the nation's investment in the Federal Writers' Project of the Works Progress Administration, a 'make-work' project in times like our own ... of dire financial outlook among workers. Secondly, this is purported to be a slave's account (Monk himself was long dead, I assume): I was skeptical about any of the Estills taking care of Monk's financial needs. Other accounts report this was the doing of James Estill's brother Samuel, who subsequently moved to Tennessee. James Estill's oldest heir (Wallace Estill, 1771-1860) was only ten years old. How likely is it that he cared for Monk "in comfort for the rest of his life?"
Posted by rdhardesty at 4:43 PM No comments:

Another slave saved the life of an Anglo on the frontier of the Kentucky District of Virginia in 1782. In addition to Uncle Monk, who saved the life of my 4x gr-grandfather, James Berry (c1752-1822), I have discovered that Black Sam, property of Edward Cabell, saved his owner's daughter.

From Slavery in the South: a State-by-State History, by Clayton E. Jewett, John O. Allen
Page 101:

"In another oft-told rememberance, Black Sam, a chattel of the Virginia-born Edward Cabell, saved the youngest member of his master's family, Augusta, after Indians attacked the homesetead and torched their cabin. Cabell's wife and other children perished in the flames. Sam rescued the young girl and carried her to safety to the nearest fort. He hid during the day, gathering berries for sustenance, and after three nights was able to reach help. There he met his master who had just returned from Virginia, bringing along with him other Cabell slaves, including Black Sam's father, mother and wife. (Coleman, 1940, p8)"

Posted by rdhardesty at 12:30 PM No comments:

Chained to a Commitment

Oh, man; I'm not sure what I am getting into.
Posted by rdhardesty at 1:27 PM No comments: