He is the Goods

Rev. Andrew Tribble (1741-1822) was a Baptist preacher who was so revered by our family that at least six individuals in my tree were likely named in his honor. A cousin and fellow researcher recently informed me that history also records an African American performer by the same name.

My mother has long held that skill sets pretty much overlap: any good sermonizer probably had to make a career decision on whether to go into acting instead.

'Tribble' is an interesting appellation. What I find startling is that, although their lifespans did not overlap, both Andrew Tribbles lived in Madison County, Kentucky. The African American Andrew Tribble (1879-1935) was born there to Alice (likely Scutter or Scudder, b c1855), who was widowed by 1880 when she and sons Amos and Andrew were boarding in the village of Union. (Amos and Andrew, we'll return to that.)

There's high likelihood of a relationship between the two Andrew Tribbles. Tantalizingly, at the bottom of the 1880 Madison County census page is listed the unmarried (white) Columbus N. Tribble (b c1812), grandson of 'my' Rev. Andrew. He's farming beside (black) Jacob Tribble (b c1836), Jacob's wife, and nine juveniles (all described as 'servants' ... even to the one-year-old). Tribbles (and Scudders) are in close proximity. Online family trees peter out, failing to name the black Andrew Tribble's father. Knowing what I do about Jeremiah Turner, I realize it's quite likely I'm cousins with this 'new' Andrew Tribble.

Evocative of Ball's The Sweet Hell Inside, I learn that, as a child, Andrew Tribble performed in the 'The Original Pickaninny Band,' who found success with a composition In Old Kentucky. He was married, singing and dancing in Chicago when, aged 25, his career as a funnyman took off. Soon he was appearing in drag costume and was cast in The Shoo-Fly Regiment, one of the first all-black musicals to hit Broadway (1908). In his 1988 book, The Ghost Walks, Henry Sampson quotes a contemporary reviewer as saying Tribble's spinster character, 'Ophelia Snow from Baltimo', "was exceedingly well done. All must give it to Tribble, he is the goods."

In short order, Tribble was touring Europe as 'Babe Johnson' in Captain Rufus. He's credited with dozens of roles in his 40-year career. In 1931, Tim Moore (who played 'The Kingfish' in Amos ’n Andy) "and his vaudeville straight man, Andrew Tribble, performed one of their funniest routines in Oscar Micheaux's first talking picture, The Darktown Revue," reported George Tyler in his column 'Harlem Rambles,' in Baltimore's Afro American.

And we are back to Amos and Andy, a duo that - in 1928 - was one of the first comedy series heard on radio. The black sitcom had nothing to do with Amos and Andrew Tribble. Written and voiced by Charles Correll and Freeman Gosden, the duo lured a huge and sustaining audience by pretending to be a pair of hapless Georgia farmworkers, transplanted to Harlem. The lead characters of this tremendously successful broadcast were all African American. Correll voiced Andy while Gosden voiced both Amos and The Kingfish, according to Wikipedia.

Did you know Amos 'n Andy were originally white?

After failing to find a film audience by appearing in black makeup, Gosden and Correll hired black talent when they began televising the program. See the clip here.

Instead of wading into debate about whether Amos 'n Andy were derisively stereotypical, a conversation in vogue since Bishop W. J. Walls began a full-fledged crusade against the characters in 1930, we will return to the cross-dressing Tribble. In the 2001 anthology, African-American Performance and Theater History, Annemarie Bain takes serious the comedian, calling Tribble's work, "a determined break from constraints imposed by gender roles in society."

In 2003, professors Hill and Hatch, in their Oxford-published History of African American Theatre, cited Sylvester Russell, whom they termed 'easily the most severe black critic of the era.' Russell wrote for the African American newspaper Freeman, at Indianapolis: “Mr. Andrew Tribble [is] the greatest protean artist his race has ever produced … Watermelon Time was a perfect fit of a song, in which Mr. Tribble wore salmon silk, something wonderful in quality, that outshone anything in the female contingent."

Critics took the genre seriously, often given detailed accounts of vapid story-lines. R. W. Thompson’s 1910 Freeman review declared “Andrew Tribble, a Washington favorite, plays ‘Babe Johnson’ … with a naturalness that stamps him as the best impersonator of female comedy roles in the business, and the house was in a con-stant roar all the time he was on the stage. His costumes were up to date, and his ‘hobble skirt’ was a wonder to behold. Mr. Tribble was given a big ‘hand’ nightly."

Bain spends several pages on Tribble: "In his female impersonations, Tribble seems to have relied on the comedic elements solely. He was not presenting the prima donna character of white minstrelsy, whose allure was in the convincing portrayal of her realness." "Gender impersonators such as Tribble were primarily comic in purpose and did not in any way thrive on the ambivalence of whether or not Tribble was truly a man or a woman."

Tribble's work arose from historical traditions of white, ante-bellum 'minstrelsy.' Adding African syncopation to European melodies like highland reels and Irish jigs, lyrics parodied African American vernacular. Think of the songs Dixie,* and Carry Me Back to Ole Virginny,** as well as the titles All Coons Look Alike To Me, and She's Gettin' Mo' Like The White Folks Every Day. White mintrelsy became wildly popular, and was given its place in legitimate theater. Reublin and Maine, at The Parlor Song Academy describe how white men singing 'coon songs' "exploited every conceivable black characteristic, real or imagined, for its comic possibilities. African-American aspirations to a place in society, food preferences, the imagined inclination for crime, and gambling all were exploited." Minstrelsy continued all through the reconstruction period.

Later, in the same era when Tribble was performing, my gregarious maternal grandfather went to town and - smearing burnt cork on his face - sang, danced and (as has been passed down to me) engaged in slapstick comedy with other local talent before fellow Methodists or Masons. Minstrel shows were originally performed by white males in 'blackface.' These performances relied on black culture for inspiration, yet fiercely denigrated people of color.

To recap: we have white men pretending to be black fools. Then we have a black man, also in parody, pretending to be a woman. Both talent pools conspired to satirize women. Bain says - as women sought the vote - Tribble's impersonations were one way of dealing with women's changing social roles. Hill and Hatch observed a new, burgeoning population escaping their misery in minstrel laughter, music and mockery: "In the flush of this stimulant, the immigrant’s status was lightened by the knowledge that he was ‘free, white, and twenty-one.” To that congregation we might add 'male.'

It's a strange milieu. In Ragged But Right: Black Traveling Shows, Coon Songs, and the Dark Pathway to Blues and Jazz (2009), Abbott and Seroff caution readers: "Minstrelsy has become another ‘forbidden’ subject, lately reduced to a metaphor for historical racism in popular culture. But do not confuse the African American minstrel companies of the ragtime and blues era with their nineteenth century white predecessors. Black minstrel companies stole the audience away from the pale imitators, thus opening a pathway of employment for hundreds of musicians, performers, and entrepreneurs." They dip into the Freeman to cite a black critic who called Bob Cole and Billy Johnson (African American producers who ushered Tribble to national prominence) “a credit to the race,” declaring, “It has always been the motive of Messrs. Cole and Johnson to elevate the Negro on the stage, by laying aside the stereotype style of Negro performances and opening up a new field for the more ambitious Negro on the stage." At times if not always, Cole and Johnson's touring troupe were all black. "Minstrels managed to broadcast the latest trends in racial music, dance and humor throughout the South," where they were sometimes banned.

Said Will Marion Cook, African American violinist turned composer and musical director of the turn-of-the-century hit Clorindy: “Negroes were at last on Broadway, and there to stay. Gone was the uff-dah of the minstrel! Gone the Massa Linkum stuff! We were artists and … nothing could stop us.”

I've found one quote directly attributed to Andrew Tribble (The New York Age, 24 Dec 1908). From that:


"I never go on the stage unless I try to do my best. That, somehow, has always been my motto, and I have been well paid for sticking to it."

Tribble was playing 'Miss Lilly White' in Cole and Johnson's The Red Moon at the time. I cannot discern from the image (above, right) whether a black man was portraying a white woman in this role. But my mind boggles as I gather from several sources that black minstrelsy followed at least one custom established by whites: Tribble was known to perform in blackface.

So, let me see if I have this right. At the dawn of the Jazz Age, African Americans were highly compensated for going into blackface and mocking white actors who had been pretending to be black. Tribble, in blackface, pretended to be Lilly White.

"According to legend, Tribble died while performing on stage in Baltimore in 1935" wrote humorist Travalanche in 2019. See more at Drag Star of Darktown.

Communally-expressed humor can take public dialogue to subjects it otherwise might not entertain. Ministers and minstrels both seek to alleviate suffering. Sometimes they offer relief that is a detriment to others.


*Dixie became an anthem of Confederate succession prior to the Civil War. White minstrel composer Daniel Decatur Emmett received royalties for this popular hymn ... as an Ohioan in New York City. Talk about cultural appropriation, Lincoln ordered Dixie played the day following Lee's surrender, saying, “Our adversaries over the way attempted to appropriate it, but I insist that we fairly captured it.” Hill and Hatch offer the possibility that not only was Dixie written by a Yankee, but that credit might go to Emmett's African American neighbors, Ben and Lew Snowden. Their Ohio tombstone reads, "They taught Dixie to Dan Emmett."

**Carry Me Back to Ole Virginny was written in 1878, about the time of Tribble's birth. It is credited to James Bland, an African American minstrel born in New York. In 1940 this work, with its romanticized view of slavery, became Virginia's State Song. In 1994 the Virginia Senate proposed amending some lyrics, replacing 'darkeys' with "dreamers" and "Massa" with "my loved ones." The bill failed. In 1997 Governor George Allen signed legislation making this minstrel ode the 'State Song Emeritus.'

UPDATE:
From an Andrew Tribble researcher: 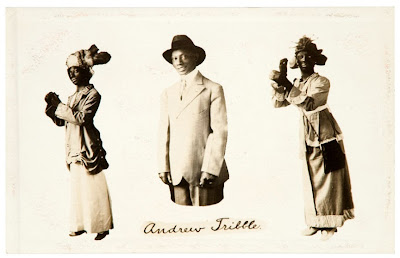