Hypodescent is the societal practice of assigning children of mixed union to the ethnic group which is perceived by the dominant group as being 'subordinate.'

Appearances can be pretty deceiving, I figure. I was raised on Nazi stories, describing how white supremacists hunted down anyone with A SINGLE DROP of Jewish blood. As a kid I heard that a Negro was any person who had a single drop of black blood. One drop and, no matter what you looked like, you were in that other race. Well, not just ‘another’ race: you were in a race that wasn’t as good as people who were all white.

And what is 'all white,' anyway? I got to thinking how best to categorize people, based on race.

An African-American cousin and I were discussing 'octaroons' and 'mulatto,' and the whole idea of race sorta collapsed on me. I was trying to figure out how pigmentation will be handled after racism has faded from our consciousness: I had this vision where we’d each be rated by a specific, pertinent number; no longer categorized 'Non-Hispanic White' or 'Caucasoid' or whatever. I figured science would give us a number (or a code, for those embracing complexity). I thought that number or code might come from DNA research, but maybe it will be a number generated by a densitometer.

The Reflective Qualities of Melanin

But then I realized I change pigmentation throughout the year (Before my honeymoon I no idea that blacks darkened after a couple weeks in Hawaii.), so we’d each have to be a range numbers. Then, I realize I have moles and sometimes scabs like what I got from scratching chigger bites while down in Kentucky … heck I’m a vast array of skin tones!

Lighting Directors and Color Corrections Specialists, when producing close-ups for television, know that each face – from the blackest African to the yellowest Asian and the pinkest Anglo – reflect essentially the same range of colors. The pigmentation we reflect is more similar than we realize.


My whole concept of white superiority took a hit when I helped produce a radio program about skin tone. Not only does my coloration change, the rules for being the 'best' color have also been in play. Heard the term ‘blue blood?’ It meant the subject came from a fine family (wealthy, and in some way related to someone in power). Blue blood referred to the veins in a white person’s arms. The French introduced powders, even hideous looking, lead-based ointment, to make themselves whiter than humanly possible. My great-grandmother (left) employed a parasol to ward off the sun, presumably because she did not want melanin granules to expand among her skin cells.

Then, swept in by the Industrial Revolution, most workers left the fields and took jobs indoors … laboring in factories. They got pale. Wealthy whites responded by sporting sun tans. The rate of skin cancer shot up in their class, but at least you could tell by looking at their handsome, bronze skin, that they were wealthier than most of the rest of us.

While analyzing racial profiling data, a new concept of pigmentation dawned on me. Portland, Oregon police had ascribed racial categories to drivers they had stopped. We were breaking down statistics by racial categories. African Americans were stopped more frequently than Hispanics and both were stopped about twice as often as Anglos. I realized that, if we had been supplied densitometer readings, the frequency by which these people were subsequently searched would fall out on a line: the blacker the driver they have stopped, the more likely it is that Portland police officers will search them. (Plot spoiler: African Americans were half as likely to be carrying contraband, even though they were stopped twice as often, and then searched twice as often as those that police identified as white.)

Coal black folks get worse deals than ‘high yaller’ ones, I suspect.

What a weird world. Like pigmentation has anything to do with anything else: criminality, intelligence, ability to love.

It came to me that geneticists can give us a number ... or some sort of solid, identifying code that will evoke racial heritage. I'll admit that I'm not sure how informed we are when we speak of the Hispanic or Jewish race. And I'm not sure what advantage that knowledge supplies, but where our genes came from seems  important to classifiers. 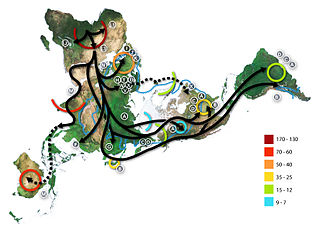 And then I heard that DNA research has confirmed that all human genetic material originated in Africa. No matter how white you are, your people were at one time black.

And what of the term 'caucasian male?' Instead of a point of origin, categorizing in this way makes it important that our genes parked for a time in a certain geographical location (like the Caucus Mountains).

Like the vector scope analysis (top), my haplogroup data set becomes meaningless when we understand that most people's genetic material, over the expanse of human history, has largely traversed a mesh of similar circuits. Imagine the vast web that would connect all the places your ancestors inhabited as they led up to your parents. Would a code describing this web actually distinguish you any more accurately than the label 'Scots-Irish?' Besides, if your DNA tests don't take you back to the Yoruba or a neighboring tribe in Africa, then I would hold those results as suspect. They may be shielding you from your true humanity.

I am not the only American to be intrigued by the categorization of people by skin color. Certainly moreso than, say, eye color. I know my countrymen have put a lot of energy into discriminating epidermal hues , cranial constructions, nose flanges, etc., and mostly so one pigmented group can declare itself superior to another. So that one group can dominate (take advantage) of another. I can't see what racial analysis based on, though.

I can see that, while the original, race-based cause for such degradation is probably meaningless, the history of racial oppression is all too real.

Our history of slavery … I think that DOES have an impact on things, even today. I know from my work among Native Americans that deep, psychic pain courses through communities who identify in this way. I cannot imagine the ache that still reverberates, knowing one’s ancestors felt either the repression of repeated attempts at genocide, or endured four centuries of enslavement. To me, the horrors at Abu Ghraib are immense … and they only lasted a few years. I cannot imagine, generation after generation, suffering this kind of torment. I cannot imagine thinking that there is no way out ... even for your children's children.

Some ambitous peoples wanted to be in a group that dominated others. I guess it was easier than doing all the work yourself. Those with an enduring history of success chose not to define themselves by height, or eye color, or muscle tone ... but by skin color. And they assigned subordinate roles to children who were not precisely in their dominant parents' color range.

Some folks say that Thomas Jefferson's red-haired, African American son was quite intelligent. Yet Jefferson held hypodescent practices. Slave Tom was prevented from living his life to the fullest. Why would a man do that to his son? Martha Washington never freed her half-sister. Ann Dandridge Costin and all of Martha's nieces and nephews were treated as property, to be divided up according to Martha's 19th century will.

Yes, this race thing is tricky. The true racial identity of my olive-skinned grandmother was likely shielded from me. Maybe I'm a quintroon, but pass as high yellow. My wife is as black as a Queen of Spades ... but guess what? With the vagaries of genetics, her heavy pigmentation might deceive you into thinking she's closer to her African roots. For all I know, of the millions of our ancestors who have not yet made it into paper-trail databanks at ancestry.com ... more of mine may have been recently African than hers.

And I guarantee you: we are all of African descent. The amount of melanin we bear has as much to do with deservedness as nostril hairs. We have simply chosen a methodology of valuing one another. Our methodology of assigning values has no useful or meaningful measure. It fails any test of reason. Racism derives its authority from mere convention.

I assume it will not be a Herculean task to simply develop new conventions and put an end to race-based attempts at domination.
Posted by rdhardesty at 3:00 PM 2 comments: