See What Will Come of It

Researching participation of a paternal Haradon clan, in the Civil War Battle of Stones River, I unearthed a first-hand account of hospitalization and burial. The Union Army of the Cumberland and Army of Tennessee, C.S.A., had suffered nearly 25,000 casualties in a clash which heralded the new year of 1863. About 1700 Union & 1300 Confederate soldiers had died in several days of fighting, just west of Murfreesboro, Tennessee.

President Abraham Lincoln issued the Emancipation Proclamation on 1 January 1863, in the midst of this days-long battle. It declared "all persons held as slaves" within the rebellious states "are, and henceforward shall be, free." Tennessee, by popular vote, seceded from the Union in June 1861: slaves therein had been declared freed ... by a government their masters had withdrawn from.

The author of the news account, 'J.S.P.,' in the 20th Independent Battery, Ohio Volunteer Light Artillery, is most likely Tennessee-born John S. Patterson. Forty years old, and just having been promoted Corporal after two month's service, he uses the military term 'contraband' for freed slaves: “I rode out to the cemetery to see where our soldiers are buried. There are many persons constantly engaged burying the dead,” he wrote from Nashville, where Haradons lay wounded in one of dozens of makeshift facilities. “The graves, in rows and close together, cover nearly two acres of ground. – There are about 700 Confederates and nearly as many “contrabands,” buried here – eight or ten of the latter daily. They are put in the ground as close together as they can be set.” (Quotes in the original may indicate the term was being introduced.)

By an Act of March 1862, the U.S. Congress prohibited Union officers from returning "fugitives" from Confederate service, or returning those who escaped from persons to whom "labor is claimed to be due." The term contraband referenced the first case: that of captured enemy property.

'Contrabands,' 'fugitives,' or self-emancipated; they were used by the U.S. Army in very much the same way Yankee armed services employed forced, slave labor. Many are the incidences where commanders sought to shun responsibility, ejecting refugees incapable of this drudgery from finding haven among their troops. Responses to emancipation among the 100th Regiment, Illinois Volunteer Infantry - in which the Haradons served - ranged from disgruntlement to outright threats to abrogate three-year commitments.

While many social signals were given during recruiting ... when war-boosters back in Illinois telegraphed their belief that this fight was to eliminate slavery ... the primary motivating factor, for many who did enlist in the 100th Illinois, was to preserve union formed of revolutionary resistance to colonial exploitation. Not all had signed on to free slaves. Many Yankees were certainly uncomfortable in a new social order. Not a few were discomforted to find themselves in proximity to free Negroes.

It should be noted that Lincoln had advanced a Preliminary Emancipation Proclamation (left) on 22 September. Three months had passed, to psychologically adjust to the idea that subjugation would end ... for some. Yet it's obvious that the Corporal does not yet fully comprehend emancipation. In the Quartermaster's Unit, he sets the value of wartime butter, flour and potatoes in dollars. "Salt is so scarce as not to sell at all … at any rate a barrel of it is worth more than a negro at these times.” Patterson perceives a marketplace where oppressed human lives still have pecuniary value.

Even though partial emancipation has been fully proclaimed, Patterson is curious as to the lived condition of slaves. He does not inject 'former' when discussing a woman's master.* It's interesting that he thinks readers will find it notable that a runaway slave he interviews "has a decided preference to be free." As if that aspiration is challenging to consider. "They all testify to this," says Patterson, of his informer's contention: "We never had such easy times." Dislocated, freed slaves "fare better now than when the seccesh army was here." Patterson is quartered in a barn; food and even firewood are scarce, even for those with cash.

The correspondent, reporting to the Sandusky, Ohio Daily Commercial Register on 22 January (excerpted in the image, below), is particularly curious about relationships. Some masters "treated their slaves as well as their children," relates Patterson. His interviewee was reluctant to marry when enslaved, however: the man, now a father, avers it would have been far too challenging to invest emotionally, and then "stand by," as a loved one was humiliated and physically abused.

"No, it won't," contends his counterpart. "[We are] against them now," says he ... of those who advocate such policy.

"Do you belong to the man of this house?" asks Patterson. In the current tense, as if emancipation has not occurred.

One glimpses a sense of humor as the freedman explains he never has. In his accounting, he asserts his master (likely former Tennessee Bank President, Granville Physic Smith) entered service as Colonel in a Confederate Army. "He run away from me," the subject explains. 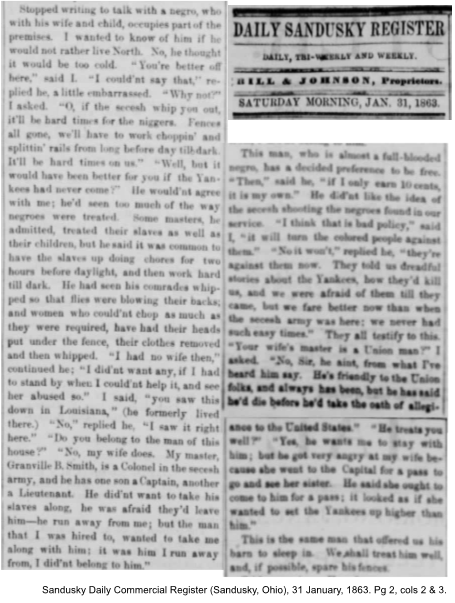 The day following, on 1 February, reporting by the Daily Ohio Statesman in Columbus questioned the Proclamation's effect. "It is now just one month since the President's second and great Proclamation of Freedom, as the Abolitionists call it, was issued. By this time, according to radical prophecies uttered before the issuing of the proclamation, the backbone and sinews of the rebellion, which the radicals assure us are the slaves, should have been so broken and weakened that the Confeds would be about giving up the contest in utter despair.” Partisan, Democratic editors employed the term 'black bondman' when referencing an anticipated spike in recruiting: Lincoln's Proclamation “has called neither white not black soldiers into the field; it has not promoted slave insurrections, or excited a single black bondman to strike for freedom.”

“Abolitionists and their followers hang back from the service as much as before, and are trying to force the negroes to do all the fighting for them,” contend 'Copperheads' who are willing that the Union be restored, even if slavery remains intact. "Well, arm the negroes, as many as you can get, and do it quickly, and see what will come of it.” Editors no doubt hope readers will shudder at the thought of Blacks, so recently scarred by whips, finding rank while bearing lethal weapons.

*It's unclear, in the Sandusky reporting, which words are Patterson's and which result from editors. The interviewee, "almost a full-blooded negro," is to have used the term "they" when speaking of colored people. We might conclude the subject would have identified with this group ... and that an author or editor's voice has imposed itself on whatever the informer sought to convey.
Posted by rdhardesty at 11:32 AM 3 comments: