These Negroes Reveal A Curious Superiority

I'm coming to grips with the idea that my 3x-great-grandfather, Thomas Turner (1764-1847) or his son Squire Turner (1793-1871) fathered children by his slaves. I've been encouraged in becoming reconciled to this possibility by the caring relationship I've developed with a great-granddaughter of that union. I like my new cousin.

I've begun to wonder whether her ancestor looked like our shared ancestors. I wonder to what degree others in my family regarded Jeremiah Turner (1840-1917) as unmistakable kin. In an earlier post, I found modern acknowledgement that larger numbers of mixed-race children were appearing among the property of rich, white, Madison County, Kentuckians than were recorded by family units holding only one or two slaves in captive servitude.

I suspect his musings were far from politically correct even in his own time, but the following account expresses cultural effects that might have resulted when 'well bred' white men had offspring by African American women.

~﻿
From a collection of writings by Baltimore critic H. L. Mencken titled Prejudices, c 1920. In this tract, Mencken decries the absence of arts & culture in the south.
Page 77 of The Sahara of the Bozart - [A desert of the Beaux Arts - RDH]


“… in the south, the men of the upper classes sought their mistresses among the blacks, and after a few generations there was so much white blood in the black women that they were considerably more attractive than the unhealthy and bedraggled women of the poor whites. This preference continues into our own time. A southerner of good family once told me in all seriousness that he had reached his majority before it ever occurred to him that a white woman might make quite as agreeable a mistress as the octoroons of his jejune fancy. If the thing has changed as late, it is not the fault of the southern white man, but of the southern mulatto woman. The more slightly yellow girls of the region, with improving economic opportunities, have gained self-respect, and so they are no longer as willing to enter into concubinage as their grand-dams were.

As a result of this preference of the southern gentry for mulatto mistresses there was created a series of mixed strains containing the best white blood of the south, and perhaps of the whole country. As another result the poor whites went unfertilized from above, and so missed the improvement that so constantly shows itself in the peasant stocks of other countries. It is a commonplace that nearly all negroes who rise above the general are of mixed blood, usually with the white predominating. I know a great many negroes, and it would be hard for me to think of an exception. What is too often forgotten is that this white blood is not the blood of the poor whites but that of the old gentry. The mulatto girls of the early days despised the poor whites, creatures distinctly inferior to negroes, and it was thus almost unheard of for such a girl to enter into relations with a man of that submerged class. This aversion was based on sound instinct. The southern mulatto of today (1920) is proof of it. Like all other half-breeds he is an unhappy man, with disquieting tendencies toward anti-social habits of thought, but he is intrinsically a better animal than the pure-blooded descendant of the old poor whites, and he not infrequently demonstrates it. It is not by accident that negroes of the south are making faster progress, economically and culturally, than the masses of the whites. It is not by accident that the only visible æsthetic activity in the south is wholly in their hands. No southern composer has ever written music so good as that of half a dozen white-black composers who might be named. Even in politics, the negro reveals a curious superiority. Despite the fact that the race question has been the main political concern of the southern whites for two generations, to the practical exclusion of anything else, they have contributed nothing to its discussion that has impressed the rest of the world so deeply and so favorably as three or four books by southern negroes.”

These are themes that Edward Ball addresses in his 2001 book, The Sweet Hell Inside: The Rise of an Elite Black Family in the South.  He too met a cousin descended from his people's slaves. Ball describes distinctions (and economic advantages) allocated by skin color and class, even among people of color. Harleston children, though deprived of the inheritance left by their upper-crust, slave-owning father, held higher rank than darker blacks after the Civil War in Charleston, SC. Perhaps Mencken (above) in his accolades, is crediting Harleston offspring; such as the talented black photographer Teddy Harleston, or childrens' choirs his sister Ella (Harleston) Jenkins made popular as America entered the Jazz Age.

This blog began, initially, to describe a search for descendants of 'Uncle' Monk, slave name Estill, the man who saved the life of my 4x-great-grandfather in 1782 and subsequently became the first slave freed in what is now Kentucky. I want to know more about the brave fellow who carried James Berry (1752-1822) 25 miles to safety, following the Battle of Small Mountain, or Estill's Defeat.

During my investigation, I came upon a family history researcher who had valuable data on a half-brother of Berry's grandson and namesake, James Berry Turner (c1820-1867, my 2x-great-grandfather). I was stunned to discover my new correspondent is African American by appearance and identification. Born where I was born; nearly my age, my new source is trying to prove she descends from a union between the half-brother (Major Squire Turner, 1793-1871) and one of his slaves.


“We can only speculate about the white families of most of these people [former slaves graduating from Berea schools], but there is a great deal of evidence that many blacks of Madison County, including those who attended Berea, were descendants of very distinguished white families.”


“In 1860 Madison County had a population of 6,118 slaves, 980 of whom were mulattoes (16%). The Slave Census listed 881 slaveholders – 357 of whom owned sets of slaves including at least one mulatto (but sometimes as many as ten): about 40 percent of slave sets were ‘mixed’ (so that partly-white slaves were very widespread without being particularly numerous). But of the 110 elite slaveholders in Madison County (those owning 15 slaves or more), 70 owned at least one mulatto (most owned many more, of course …). The large-scale slaveholders, the wealthy and prosperous, were much more apt to have mulattoes among their slaves then [sic] were their poorer neighbors. Whether or not the half-white slaves of aristocratic masters were also their children is, of course, another (and usually unanswerable) question.”

The 1860 Slave Schedule for Madison County, Kentucky, (below) reports Squire Turner in possession of 27 souls. Seven are listed as Mulatto: nearly one in four. An 18-year-old male qualifies to be Jeremiah Turner (c1840-1917) my new cousin's direct ancestor. If our suspicions are correct; we both descend from 'Trading Tom' Turner (1764-1847), father of both Squire and James Berry Turner.

Puzzling over the realization that I share DNA with folks who look so obviously different, it was suggested I investigate a fellowship (Coming to the Table), where descendants of slaves are in dialogue about race with descendants of slave-owners. I have traveled to meet my new cousin and my harvest includes the fruits of warm companionship and a shared appreciation for researching family history.

It has proved difficult to describe the almost unfathomable relationship between between the white supremacist, pro-slavery, strict constitutionalist, Squire Turner and an enslaved woman who may have born his child. The Madison County text employs terms such as 'slavewife' and  'slavefamily.'  Edward Ball, in The Sweet Hell Inside, uses 'concubine,' once a long-term relationship has been established. Referring to today's standards, I initially referred to offspring of a 'slave rape.'

Descendants of slaves, shrugging off the idea that a single drop of Negro blood put one in the race of African Americans, are identifying themselves as Irish, or Scots, or whatever they discover in their family history. I explore coming to grips with pigmentation here.

Squire Turner may have wanted to contribute accurately to slave schedules; the record documents him as in the propertied the elite of a county in which the lawyer had grown wealthy. The nameless records, however, are far from definitive. The only earlier slave schedule (1850) lists a mulatto boy of 9, which may be a younger Jeremiah. I've found no record of Turner's human possessions, circa 1840, but 2 women in 1850 (ages 38 & 35) qualify. Unless she has become 60 years old, ten years later, neither candidate for Jeremiah's mother remain in the record as Turner's property. 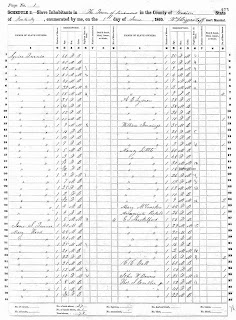 Posted by rdhardesty at 5:54 PM No comments: