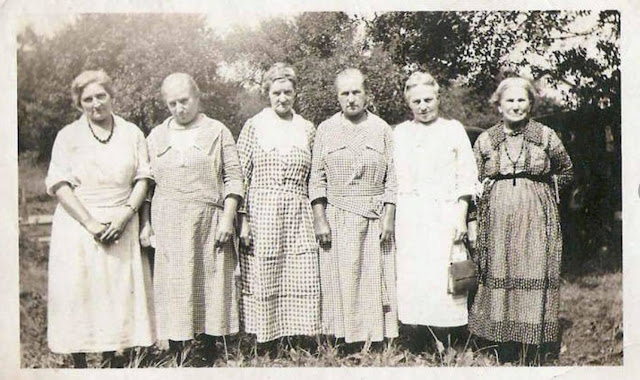 "Any familiar names here?" asked Anne Hardesty, when sharing with me a post to the facebook group People, Places, and History of Tuscarawas County. Tamara Mareno‎, new to the group, had made available the above photograph: those arrayed included her second great-grandmother, Ellen (Hardesty) Glace (1858-1932), and five sisters.

I do alert to 'Hardesty.' And Tuscarawas County, Ohio. The placename permeated research for Auswanderer: Adam Knauff into the New Lands. [Knauff being father-in-law to Rev. William Hardesty (1776-1846) and – with Elder Hardesty – pioneering Ohio by 1806.] I also alert whenever beneficent Anne calls my attention to matters of far-extended family.

"Not sure who’s who, other than Ellen who is on the right," Mareno admitted. Her nomenclature taunted me: "Ruth Hardesty Swearingen, Sarah Hardesty Shoup, Catherine Hardesty Young Dutt, Margaret Hardesty Strickmaker, Della Hardesty Renner, and Ellen Hardesty Glace." I found their maiden names among my records: daughters of Joseph Hardesty (1837-1902) and wife Hannah (Fetters) Hardesty (c1842-perhaps 1905), I claim this bevy of stout sisters as my second cousins, thrice removed.

At Written Words For You All to Read I disclosed "I've disciplined myself – generally – to confine research to first cousins, and forgo crawling out far distant limbs in my family tree." Such inhibition has much eroded in five, intervening years of inquiry. Hint of compelling chronicle can easily beckon me some distance from the trunk of my direct ancestry. Prompted by Mareno's offering, I fleshed out the above sisters' placeholding profiles. Spouses' surnames expedited the work.


Partly due to endearing photos Mareno shared elsewhere, I promptly manufactured a sense of kinship with siblings sharing quite similar countenance. I found it simple to feel related. Joseph Hardesty was, after all, grandson to my fourth great-grandfather Rev. William ... and wife Louisa (Knauff) Hardesty (1782-1850).

I'm always surprised, and quite often gratified, when I'm able to deftly craft a search string ... and lasso from online databases something pertinent and deliciously unique to subjects under scrutiny. It feels like mastery of a language that was once entirely foreign. Followed by mind melding with robots. Setting pertinent terms in a fitting order, to produce useful result: it's rewarding to pull a fact set that might define a specific life ... from the universe of irrelevant, digitized data.

Not all searches reciprocate with results as idyllic as Jeremiah and Ellen, pictured right. I'll just say the pair are posing, and that I began posing a few queries of my own.

In his 1917 application to marry (second) the already once-married Lilly Florence (Reed) Chapman (1866-1941), second cousin Frank Hardesty (1865-1919) declared himself to be a son of Joseph and Hanna.† Neither Frank nor their first-born brother, Lorenzo Dow Hardesty (1850-1916), are depicted among the above assemblage of sisters. Perhaps both men had passed away.

No, it's not a mug shot. Frank's widow Florence (left) had in 1935 been completely paralyzed on her left side for a year. Akron, Ohio reporting Woman Saved From Flames declared "her life had been endangered" on an April morning.

Sister-in-law to the flock of women above, and rather tangential to Anne's inquiry, I have to admit I enjoy it when news account, such as that pertaining to Florence, enlivens family history. Even though a fire department battled flames for an hour and a half, this house fire seemed minor after I studied maleness among this batch of second cousins.

By introducing his surname above, Mareno associated Joseph and Hanna's eldest daughter Ruth Emma Hardesty (1853-1907) with Charles E. Swearingen (1848-1882). Ruth married him in 1876. I pondered over Swearingen's lifespan and realized thirty-four years is a rather short stretch.


“There were found this morning the bodies of Charles Swearington (sic), of Kensington, Ohio ...”

Quick reference to my files placed Ruth, Charles and year-old son Leroy Swearingen at the "Village of Kensington" in the June 1880 census of Columbiana County, Ohio. I found no death records for Charles, but Alberta Pottorf's Find A Grave profile (without attribution) gave 4 July 1882 as date of his death.*

And we jolt into a thumping good yarn. Much was written of the Fatal Collision on the Ohio River. Swearingen apparently embarked upon a 4th of July excursion aboard the steamboat 'Scioto.' As evening set in, the side-wheeler 'John Lomas' collided with it. Nearly head-on. With a gash in her hull, the Scioto sank to the pilot house in an amazing two or three minutes. The Wheeling Register would report "a continuous blast of the whistle ... only seemed to die out as she sunk and the water cut off the steam."

5 July coverage by the Wheeling Intelligencer – Dire Disaster – conveys haste and dexterity by which correspondents took up their task. City newspapermen found on-scene reporting difficult to come by: "As is always the case on the night of a holiday, it was hard work to get offices near the scene of the disaster." Publishers arranged for the Pittsburgh, Wheeling and Kentucky Railroad Company to unleash an engine and caboose. By midnight, Wheeling reporters were being conveyed to the still-unfolding scene of tragedy. Western Union's Wheeling manager rode along, "with an instrument and other proper facilities for making an attachment to the wires and sending the news back as expeditiously as possible."

News dispatches flashed out like text messages from the Mingo Junction rail office. By 2:30pm on the 5th, Swearingen's name (spelled incorrectly) appeared in a Steubenville Daily Herald list of those declared missing. I felt initially less forlorn, realizing wires promptly sizzled with alert that my cousin's spouse was missing. And it dawned on me that the informant might be the newly widowed Ruth; that she may have been aboard the Scioto, and was amid survivors huddling on the banks of the Ohio. At any rate, Swearingen was among the first half of forty party-goers known to be unaccounted for ... twenty-four hours after drowning began.

"Bodies are being found very fast around the wreck," declared a Cincinnati Enquirer Special Dispatch bearing a 5 July dateline. It's as if he's being summonsed: Swearingen's name appeared twice in prominent, first-column, front-page reporting on the missing. 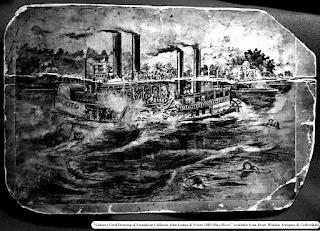 The Daily Advocate at Newark, Ohio informed readers “Friends of lost ones are cutting through the state room floors, and are despoiling the boat generally, to discover their bodies, if possible.” Their brief dispatch, immediately following, declared Swearingen's body was among four recovered on the morning of the 6th. "The number lost is now estimated at 75."

Steubenville's Herald got the spelling right on 6 July: "Charles Swearingen, of Hanover, Ohio, station, was found; he leaves a family, and is 45 years old." The correspondent likely interviewed someone who knew the thirty-four year-old laborer; someone who had traveled 40-50 miles to attend to his fate. By the Herald account, "This makes a grand total of found and missing at this writing 101."


RETURN TO TOP
NOTES:
Visual elements accompanying Timothy R. Brookes' 1998 Pall of Egyptian Gloom for the Ohio Historical Society, as reproduced by The East Liverpool Historical Society, make for compelling depiction of the Fatal Collision on the Ohio River. The "Scioto" Disaster, by Kenneth R. Bailey and for West Virginia History, offers scholarly perspective on long-term effort to assign blame and mete out justice. Swearingen's name is spelled incorrectly.

* kellybean demonstrates one of the more sophisticated uses of the 'Virtual Cemetery' I've seen at Find A Grave. 1882 Scioto is a collection of 14 memorials. All persons represented are to have perished with Swearingen.

† “Were you and Frank Hardesty engaged in business together?” Defense counsel asked the question of Benjamin Dickerson (1856-1938), in his 1906 trial for the rape and murder of Katherine Hughes the summer before. “No sir. Not Frank," Dickerson replied. "It was his father. Poe. I owned a half interest in a saw mill.” The typo was fortuitously cleared up. “You owned part of the saw mill?” “Yes I owned half and Joe Hardesty the other half.” Clarification raises my confidence that the Frank in question was, like the sisters in the photograph above, born to Joseph and Hannah Hardesty. 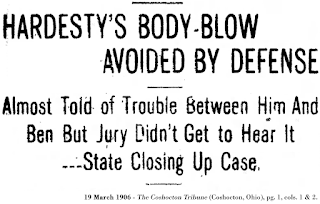 “Hardesty … intimates he has not told all,” came 19 March reporting by The Coshocton Tribune. Beneath a sub-headline ‘Hardesty’s Body-Blow Avoided by Defense.’ Tellingly, “The state made a desperate effort to get before the jury the reason of bad blood that had existed between Ben and Hardesty … but could not work it in.”

Efforts continued, at trial and in the press. Ten days later, the front page of the Coshocton Daily Age spouted “A story that is being made the most of by the state against Dickerson is this: Several years ago Dickerson was in partnership with the father of Frank Hardesty, operating a saw mill. Trouble arose and one morning the saw mill machinery was found utterly ruined. The allegation is that Frank Hardesty tracked a horse with a marked hoof from the mill to Dickerson’s barn.”

Prosecuting Attorney Thomas Henry Wheeler demanded each of the defendant's character witnesses, one after the other, tell whether they had ever heard the allegation. Or that of poisoning hogs. Or that Dickerson had been unable to "go forward" during religious revival ... telling participants he "had it in his heart to kill Hardesty." Though a few character witnesses bore out hearsay of Hardesty's storytelling, many simply replied they knew nothing of his prejudicial account, of events that long preceded Hughes' grisly demise.

Dickerson was sentenced to die in the electric chair.

The Ohio Supreme Court in 1908 ordered Benjamin Dickerson (right) be given a new trial. Among other issues, an appellate court observed character witnesses had been “interrogated about hearing of the defendant injuring a sawmill of Frank Hardesty, or throwing away some of its tools.” Judges ruled "The state having thrust these rumored offenses into the cross-examination to the extent of page after page, the accused or his counsel thought it necessary to refute the insinuations, and he was called to the stand and interrogated as to the truth or falsity of all these various rumors. Thus was the record expanded with immaterial and incompetent testimony, which could only tend to cloud the real issue and confuse the jury.”

Hardesty testified in 1908. Faintly evocative of tracking a horse with a marked hoof, he avowed Dickerson paled visibly when hearing bloodhounds would follow scent from the murder scene. Dickerson was convicted of manslaughter and served eleven of his twenty-year sentence before being released in 1919 ... the year of Frank Hardesty's death, at age fifty-four.